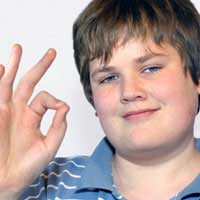 Some children with attention deficit hyperactivity disorder (ADHD) do find their ADHD symptoms improve as they get older with some adults reporting that they have ‘grown out’ of ADHD. However, this doesn’t happen in most cases and living through the teenage years can be a struggle for the teenager with ADHD and his or her parents.

The normal phases of anger and rebellion that go with being an adolescent are often worse if you have ADHD. It is fairly natural for teenagers to want some independence, to go out with their friends, to go shopping, to hang out at the park or to go to parties, films and discos. But the added problems of organisation and a tendency to impulsiveness in ADHD teenagers can make parents more apprehensive than ever about agreeing to let this happen.

The situation is a sort of catch 22. Any teenager needs to gain confidence by taking on more responsibility – but that has to happen by their parents relaxing their hold on responsibility. It is even harder if you have a teenager with ADHD who has responded well to having an orderly home life, a regular routine and you think you are just getting somewhere. Once the teenage mix of hormones and peer pressure kicks in, your teenager’s life gets a lot more chaotic and that can be difficult for them to cope with.

It may work only sometimes but ADHD teenagers seem to respond if you treat them like equals and involve them in decision making processes. This doesn’t apply only to what they do and where they go. It also is important to involve them in decisions about their treatment, to encourage them to ask their own questions and ask about medication and other therapy. Imposing a set of house rules is good for an 8-year old with ADHD, but a 15-year old needs to participate in the rule book construction if it is to have any value.

Many teens with ADHD will find it difficult to get through school years as pressure on them mounts to pass exams and do course work. Offer to help, but bite your tongue when they really resist any direct intervention.

Good liaison with school is important and it is also a good idea to raise new problems when you go to medical checkups and reviews. Treatment requirements can change as a child with ADHD hits puberty and you need to make sure that any behavioural problems are not simply due to sub-optimal treatment, or because a counselling therapy has not been tried.

There has to be some discipline at home, as with any teenager, and imposing rules inconsistently can lead to a build up of resentment, which leads then to worse behaviour. Anger is a big problem for teenagers with ADHD, so it doesn’t help to provide them with an example of losing your own temper when things go wrong. Parents need plenty of support and time away from the situation to keep a good perspective.

Try to think ahead and set up strategies to solve the worst problems. Having a homework contract or agreement is a good idea – but it is vital that the teenager doing the homework has a large say in the terms if the agreement is going to be anything other than a battle ground.

By following a routine of what will work best for them with regards timing, what tasks are done on which night, where the homework is done, hopefully, the teenager with ADHD will see the benefits of always getting homework done and in on time and see this is less painful than getting out of doing something at home, only to be in detention or worse at school.

Activities for Children with ADHD
Share Your Story, Join the Discussion or Seek Advice..
When ever i am messing about with my little sisters and they get hurt my step dad always says it is my fault and that makes me get angry so i lash out but the only thing that calms me down is when i am playing my ps3 but when he takes that away i cant calm down so i go and destroy something or go beat someone up.
Frank - 1-Dec-13 @ 6:28 PM
Title:
(never shown)
Firstname:
(never shown)
Surname:
(never shown)
Email:
(never shown)
Nickname:
(shown)
Comment:
Validate: